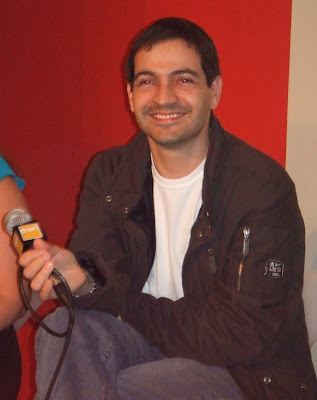 What is Enderson Rafael so happy about, is he drunk or something?!

After being forgotten inside their own country, brazilian writers have to show the world what they’ve got.

I’m a writer, but a brazilian one. And that makes all the difference. Not exactly the fact that I am brazilian, but the country where I write from. Well, I’ll put that more clear.

Yes, I am one of those Ya Books writers, the great publishing fever nowadays. As I said, the fact that I am brazilian is no problematic at all. I mean, I write quite well, so do many of my colleagues. We wouldn’t write well enough or the opposite just because we are brazilians, but here comes the big issue: the readers!

Yes, that’s true: is not like THE readers birthplace. But, of course, with almost 200 million people, there’s quite a few round here. Stephenie “Twilight” Meyer herself sold like 5 million books in . Nicholas Sparks is still in the top of the list for more than one year now. And so, J.K. Rowling, Maryan Keyes, Meg Cabot, Rick Riordan… All of them, among many many others, are going very well down the tropics. The next is David Nicholls, with his adorable “One Day”, since last week in our book stores translated, preparing the audience for the movie, which is coming in August. This is like the paradise for foreign authors.

And if we could consider any luck of borning here, this is where it ends: all the main publish houses in prefer to invest in foreign authors than in brazilian ones. Of course, this is not a rule, a clear one, at least, and there are exceptions. But they are one here, another there… well, exceptions like I said. Nothing even close to what they do in importing titles.

Look, I’m a writer, I read books from other countries, I do not think, in any possible way that should be like a “cultural island”. Of course not. But we are having trouble with proportion here. I wouldn’t be lying if I said that something like 70 or 80% of what’s published in come from foreign authors, and, naturally, with all the marketing and stuff, much less than these 30 or 20% is what we, brazilian writers, have to fight for. We are not a few, some people even think that we are larger in number then the readers themselves. And, as I said, we have quality, assured by – the few – who dares to publish us, and those who give a try on reading our books. And what upsets me more than anything is that, for those foreing authors, is like a backyard or something. Not a main market, in anyway. Some have come here to visit their readers, and were fairly welcome. And for us, who write in Portuguese, who starts our “chicken flights” career in this land… well, we’re barely known, suddenly forgotten. By media, by publishers, by readers, sometimes even by ourselves. Yes, chicken flights. Short and non-directional.

And there, where all theses amazing foreign authors come from, where people really live from writing – by that, I mean that they don’t have to work in another job while writing, like most all of us do – there, I dare to say, lies our salvation. The world is big: Chileans read four times more than brazilians, argentinians read five, uruguayan read six, American people read fifteen – YES, FIFTEEN – times more books than the average brazilian do. And 2013 is coming, is gonna be on the headlines in , and more than World Cup or Summer Games, this is our chance!

If I were a foreign publisher or agent, I’d be looking for the brazilian authors. Right now. We have pearls here, and is not hard to find them among so many oysters from overseas.

Enderson Rafael is author of the YA novel “Todas as estrelas do céu” (All the stars in the sky), among other books.